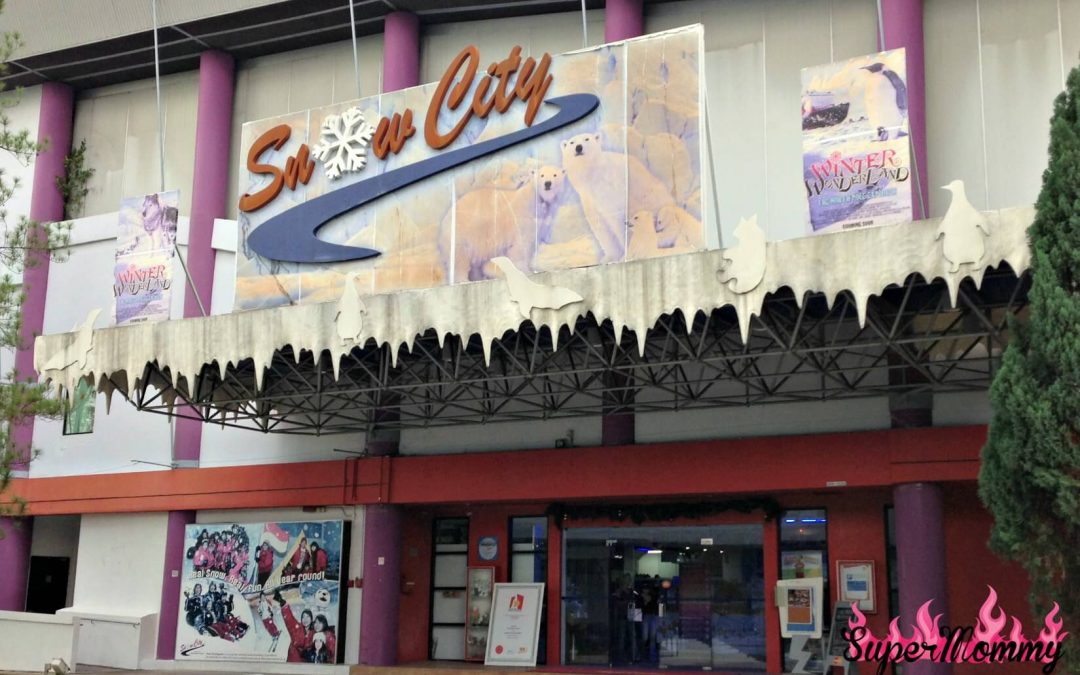 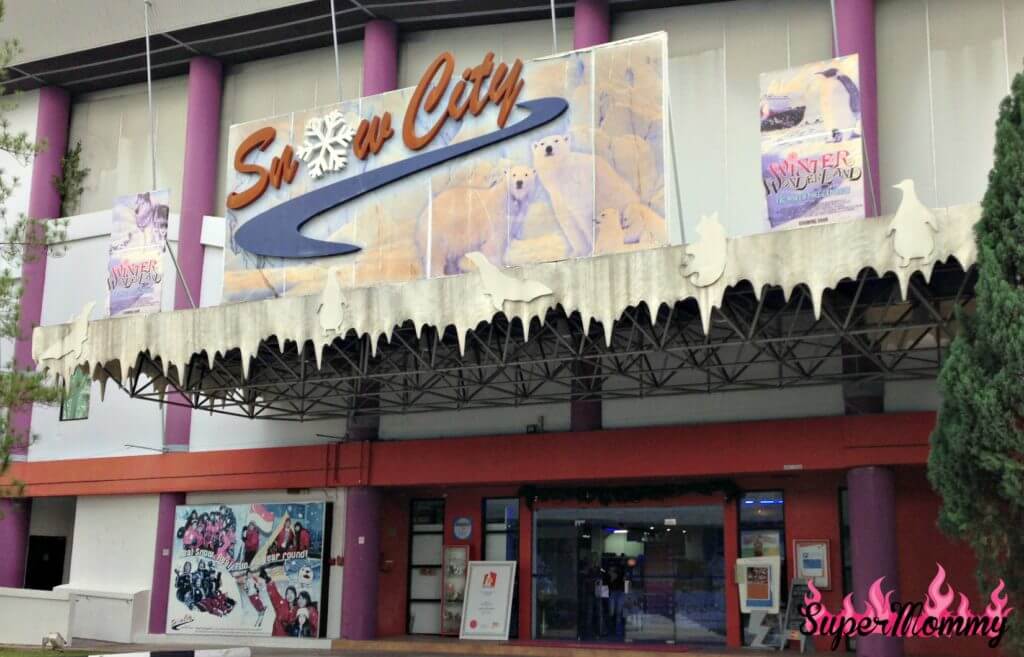 Being a family of sun dwellers and the fact that we live in Singapore, my two little boys have never seen snow! Since we are not planning a ski holiday anytime soon, I decided we needed to make a trip out to Snow City! 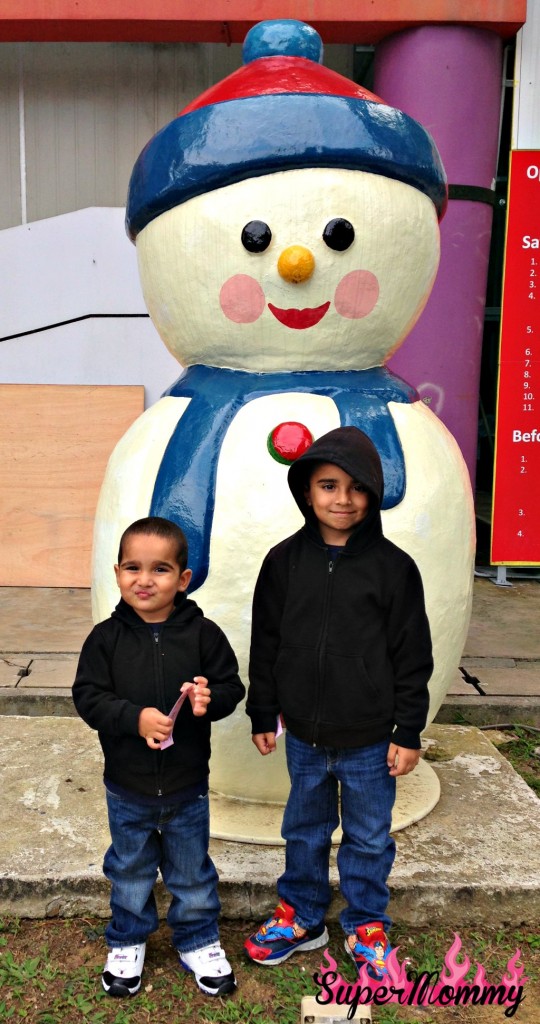 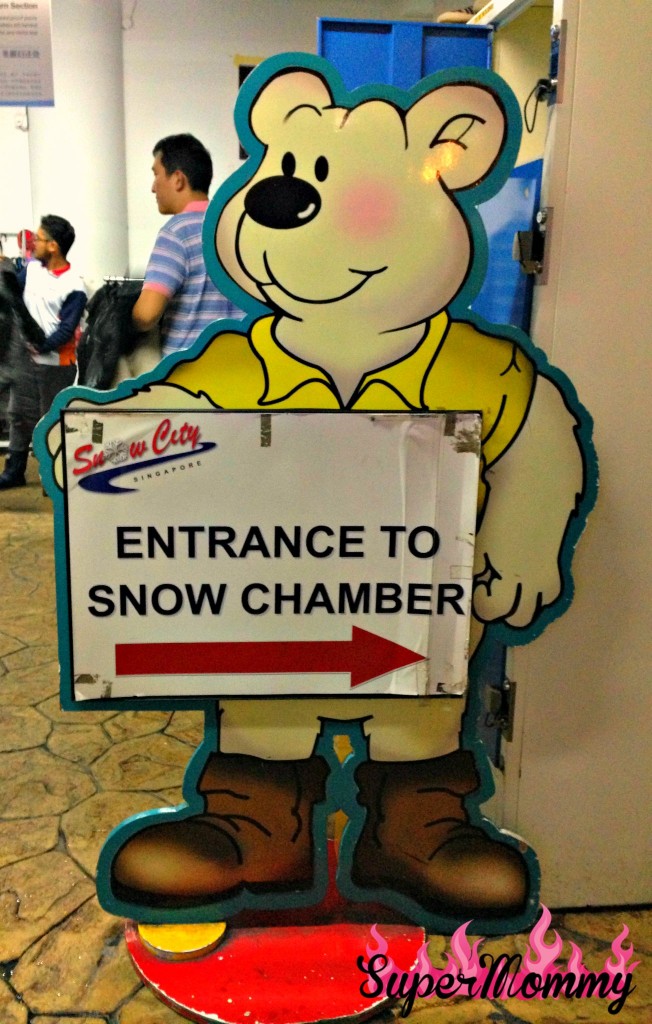 Note: Before I get started, let me first apologize about the lack of pictures for this post. You are not allowed to take pictures inside the Snow Chamber with your own camera. I did sneak a few pictures with my husband’s phone, but got scolded in the process. There are professional photographers that take your pictures which you need to view and purchase at the end of your visit.

What to Expect at Snow City. Don’t expect a big place. This should be called a miniture town, rather than a city.

Your first experience once you enter into the cold, will be the “Dino World” ice gallery. The ice gallery features more than 20 intricate ice sculptures created by celebrity ice sculptor Jeffrey Ng. The main attraction for the kids in this area is a “slide” made of ice. My boys did take a few turns on the slide, but it was very slippery – so I decided after two turns each it was time to head inside (the last thing I wanted was a trip to the hospital). 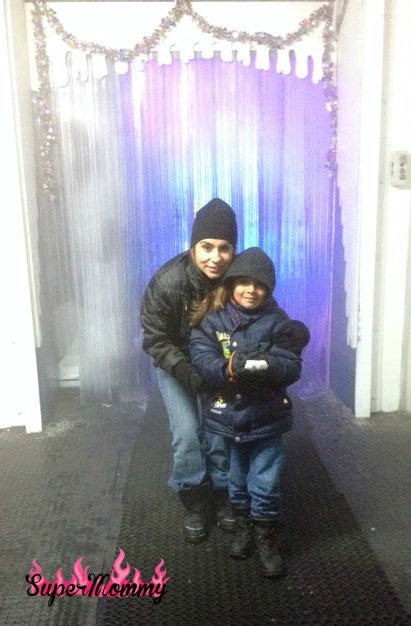 After the ice-gallery you walk through into the main Snow Chamber. On the left side of the Snow Chamber there is a gigantic snowman which the boys threw a few snowballs at and then moved on. There is also a small covered sleigh in this area. You basically sit in the sleigh and the photographer takes your picture (that is pretty much it).

On the right side of the Snow Chamber is a gigantic snow covered slope. The slope is 60m long and three-stories high. The snow slope is one of the main features at Snow City. Basically you have to climb up a long flight of stairs, with your black rubber “snow tube” (it looks like a doughnut) to get to the top of the slope. Once at the top, you sit on your snow tube and slide down the slope. 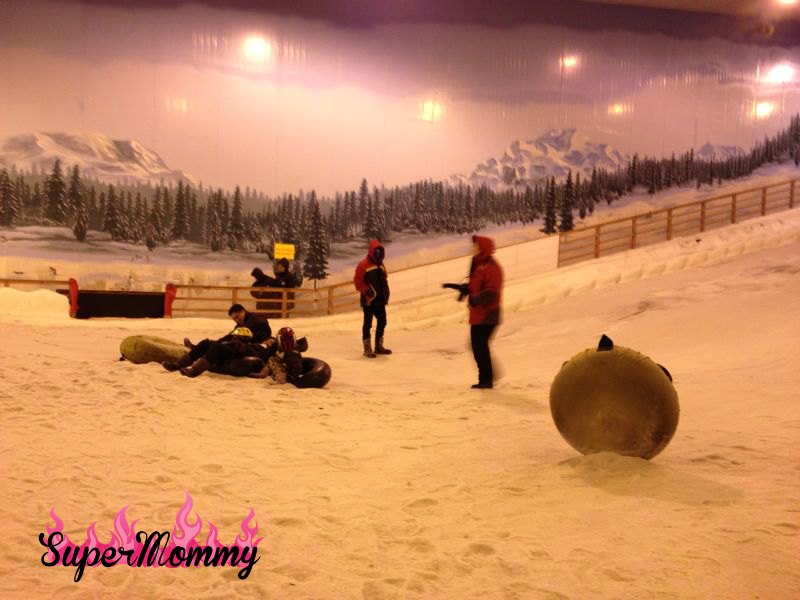 Zayden, (my 5-year old son), went down the slope three times and really enjoyed it. Xavion, (my 2-year old son), on the other hand, just stood on the side and watched (and froze). Although Xavion was really eager to take a turn sliding on the slope, I did not feel that it was safe for him to ride in a snow tube on his own.  I personally thought snow tubing down the slope was a lot of fun – but it did result in my jeans getting completely wet and I ended up with a big purple bruise on lower back. 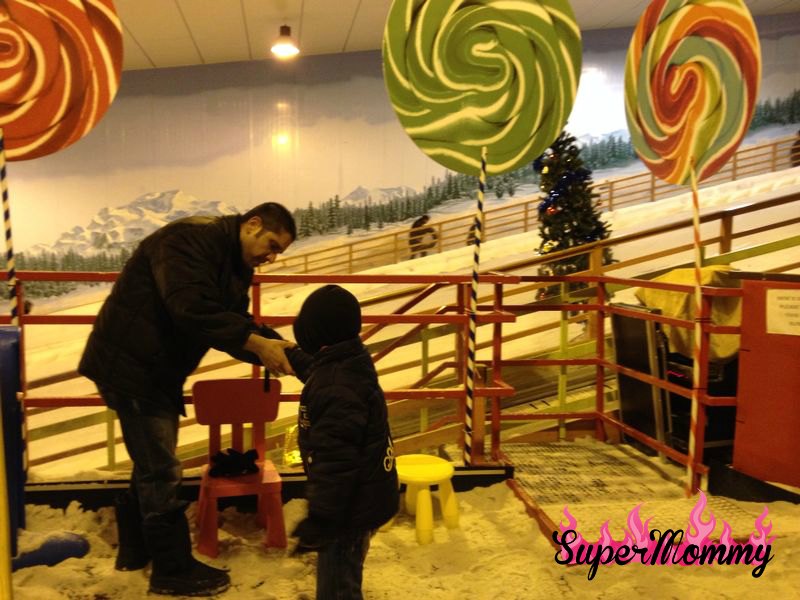 Once we finished with the snow slope, we decided to “walk up the stairs”. The stairs led up to a small balcony area to “Snowman’s World”. There is not much to do, see or play in this area. Normally I would have just made the kids pose and take pictures in the snow (but no cameras allowed), so it got boring pretty fast. Hence we spent about 5 minutes in Snowman’s World before we headed back downstairs to exit Snow City. 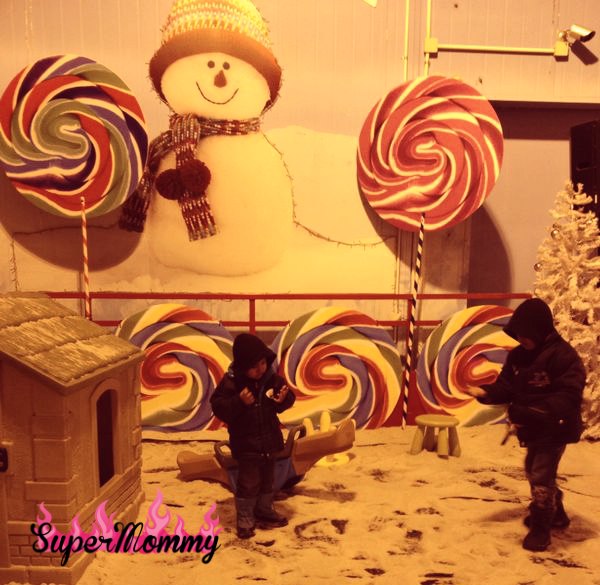 What to Wear at Snow City? It is FREEZING inside. The temperature inside the Snow Chamber and ice gallery are as low -5 and -10 degrees Celsius respectively.

Admission to Snow City includes a jacket and boots, but this is not enough. You will definitely need gloves (if you don’t have any you can rent some) and at least a long sleeved shirt to wear under the jacket. Also, make sure to wear jeans/long pants and bring some socks.

Even though it was a Sunday afternoon, there were not that many people at Snow City, however it was still very chaotic trying to get jackets and boots for all of us. The jackets are a “help yourself”, “trial & error” process. There are no sizes. Some jackets have hoods, while others don’t. A lot of the zippers on the jackets were broken, so it took awhile for us to all get suited up. Once you get your winter gear on, you need to put all your things (including your phone) into a locker (cost $2). 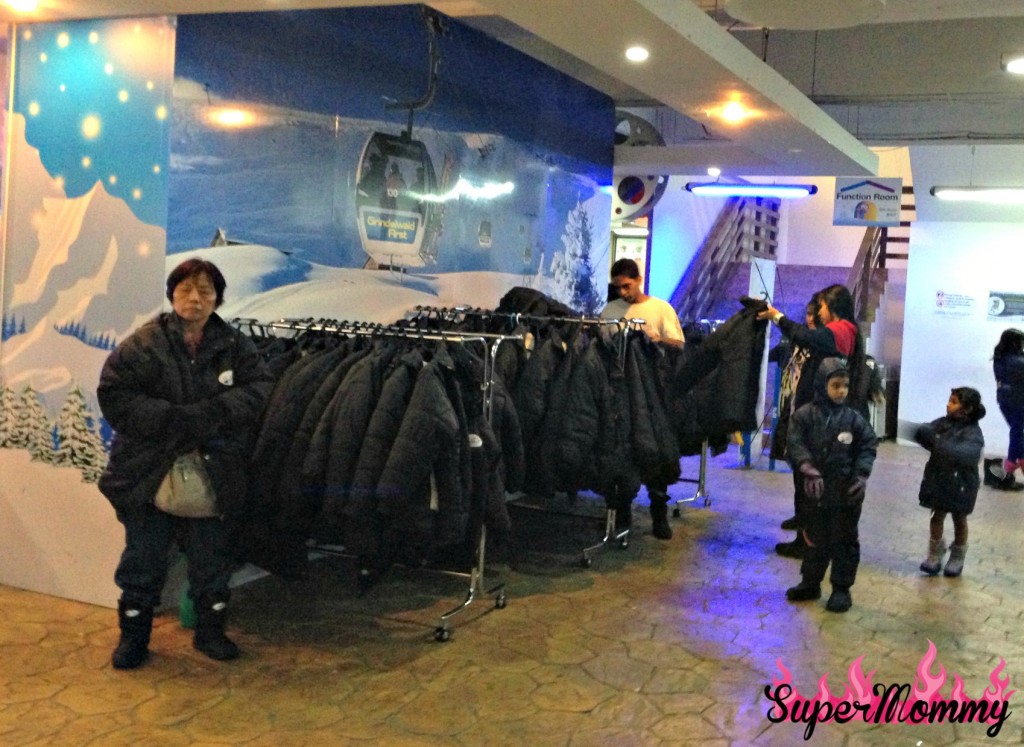 The only advice I can offer you is to dress for really cold weather!!! My kids didn’t have as much fun as they could of because they were freezing (even though they were wearing multiple layers). Xavion kept taking off his gloves to suck on his fingers for comfort – my poor baby was so cold. Both boys had rosy red cheeks by the time they left. 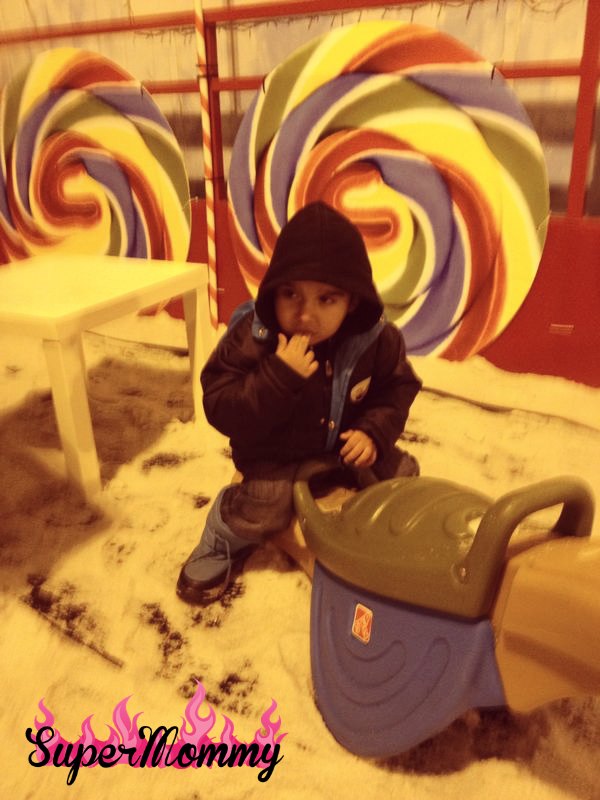 Food at Snow City? There is a small snack shop in Snow City next to the photo viewing station. When we left at approx 4:30pm, the snack shop was closed. You might want to check the hours of operation if you are planning to actually buy food there. If you are hungry there is a McDonald’s at the Science Centre, which is less than a 5 min walk away. 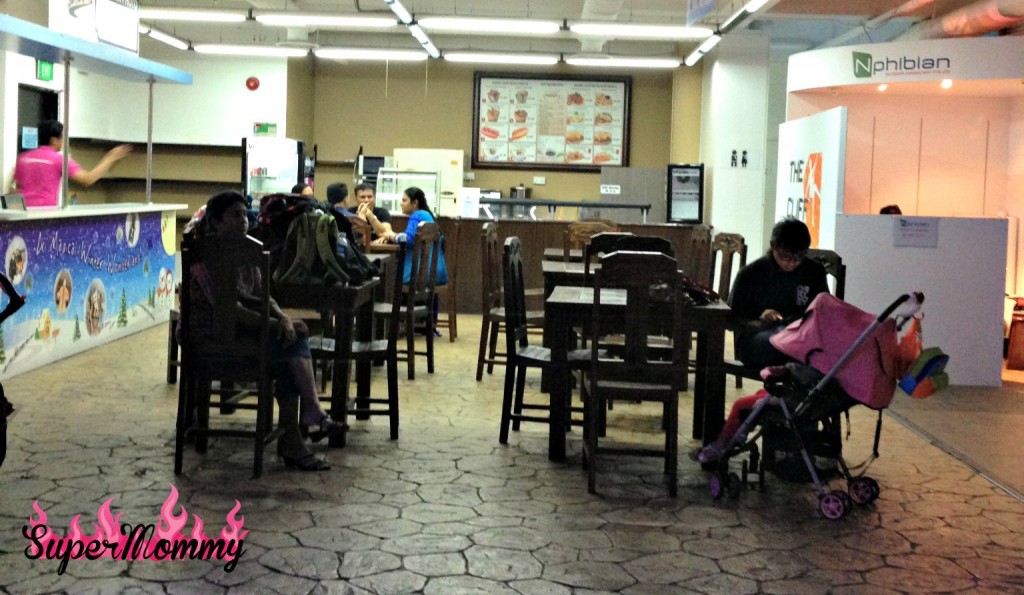 Location: Snow City is located at 21 Jurong Town Hall Road and is less than a 5 minute walk from the Science Centre. Snow City shares a parking lot with Kid’s Stop.

Hours: Snow City is open on weekdays from 10am-6pm and on weekends/public holidays until 7pm.

Ticket Prices: You can purchase tickets for 1 hour which cost $15 for both kids and adults (ages 3 and above). 2 hours at Snow City will cost you $28 for adults and $23 for children (ages 3-12).  They usually have package deals with the Science Centre, so make sure to check those out before you buy your tickets. 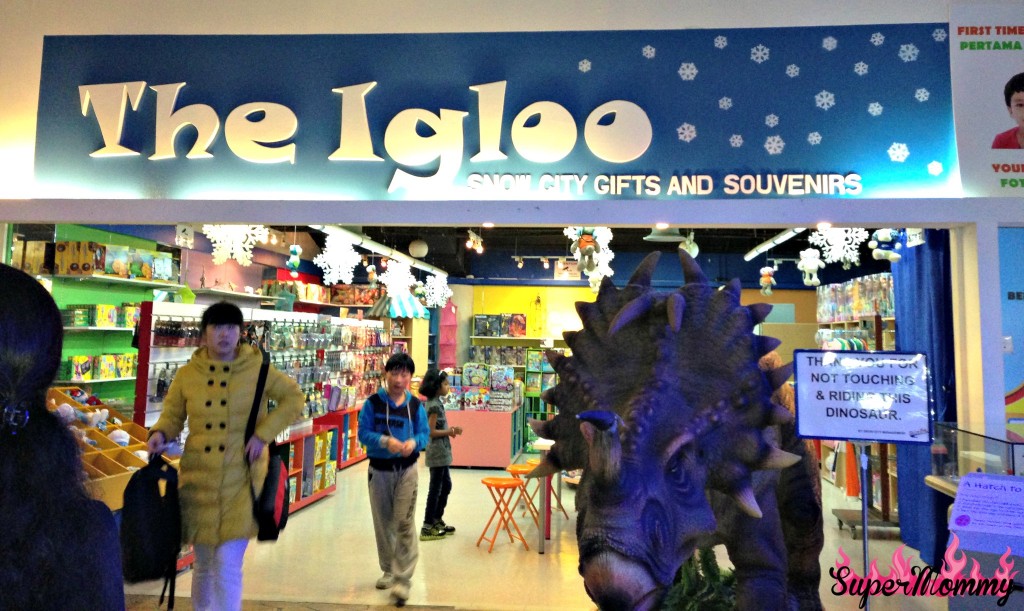 SuperMommy’s Opinion: Snow City was fun indoor experience, but a bit pricey for the little time we spent inside. We probably spent only 30 minutes inside the Snow Chamber/ice-gallery and 10 minutes getting our jackets/locker. Snow City is small and felt run-down; there is not much to see or do inside the Snow Chamber, especially for the little kids.  I do recommend checking it out at least once if you live in Singapore, especially if you don’t normally go on vacations in the snow. Snow City is a good little family outing, but just make sure you dress for COLD weather.  Zayden did have an awesome time and we will be going back again to Snow City sometime in the future, however we will be leaving his little brother at home.

Hope you have fun in the SNOW!