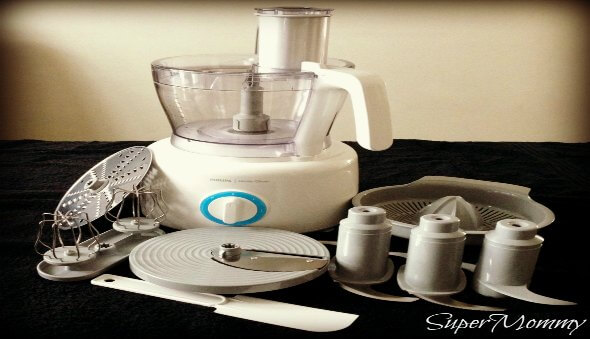 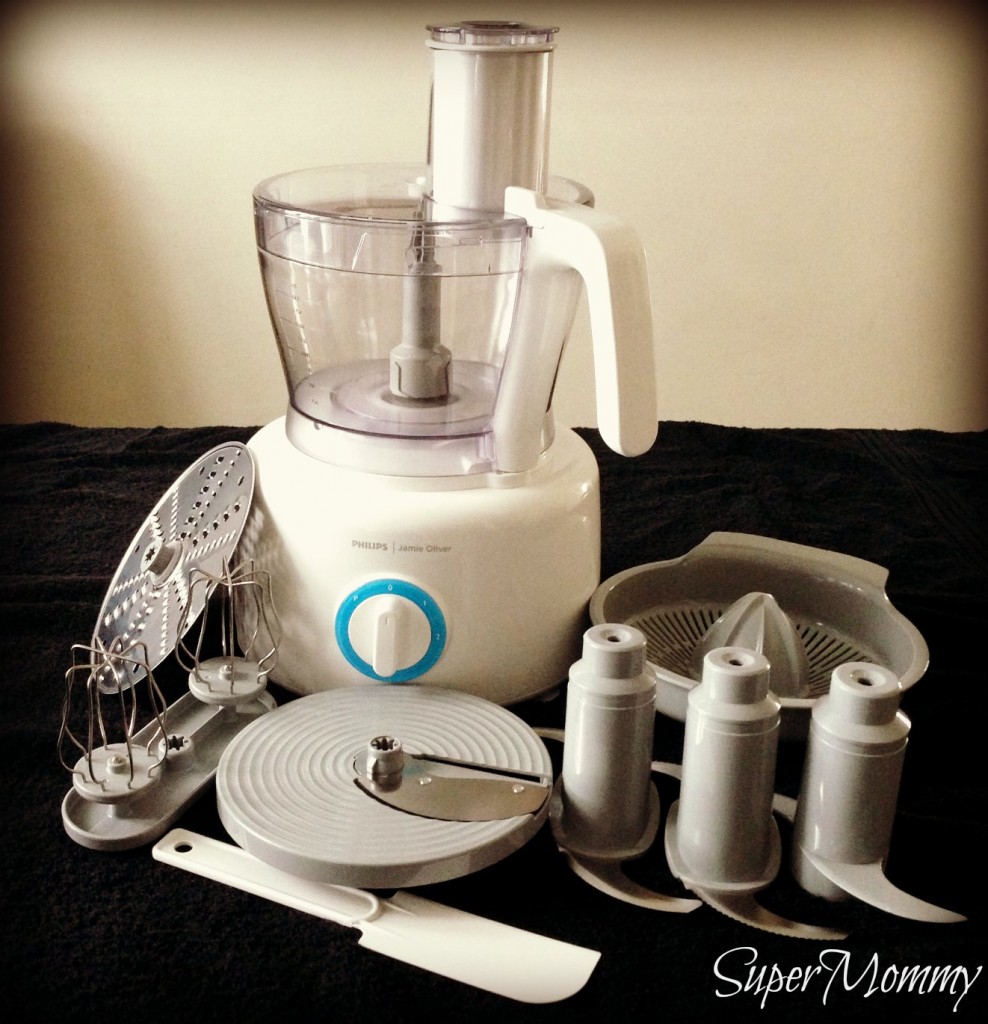 Being a busy mom sometimes it’s hard to be creative with the foods my family eats. Even though I love cooking up new recipes, I really don’t have time for all the prep work needed to come up with something fabulous. So usually week after week we eat the same things. I recently got the new Philips Jamie Oliver Food Processor and let me tell you it has cut my prep time down substantially. Just having the one machine in the kitchen has really helped my creative juices come out.

Let’s talk about my Jamie Oliver day in the kitchen… 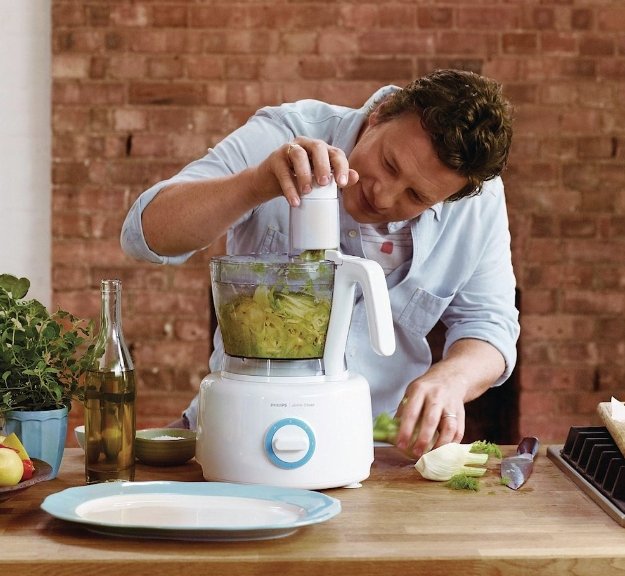 BREAKAST – Freshly Squeezed Orange Juice
To start the morning off right first I decided to make myself some freshly squeezed orange juice. I attached the “citrus press” attachment to the JO Food Processor and viola in less than 1 minute I was done. What’s not to love about fresh squeezed OJ in the morning! 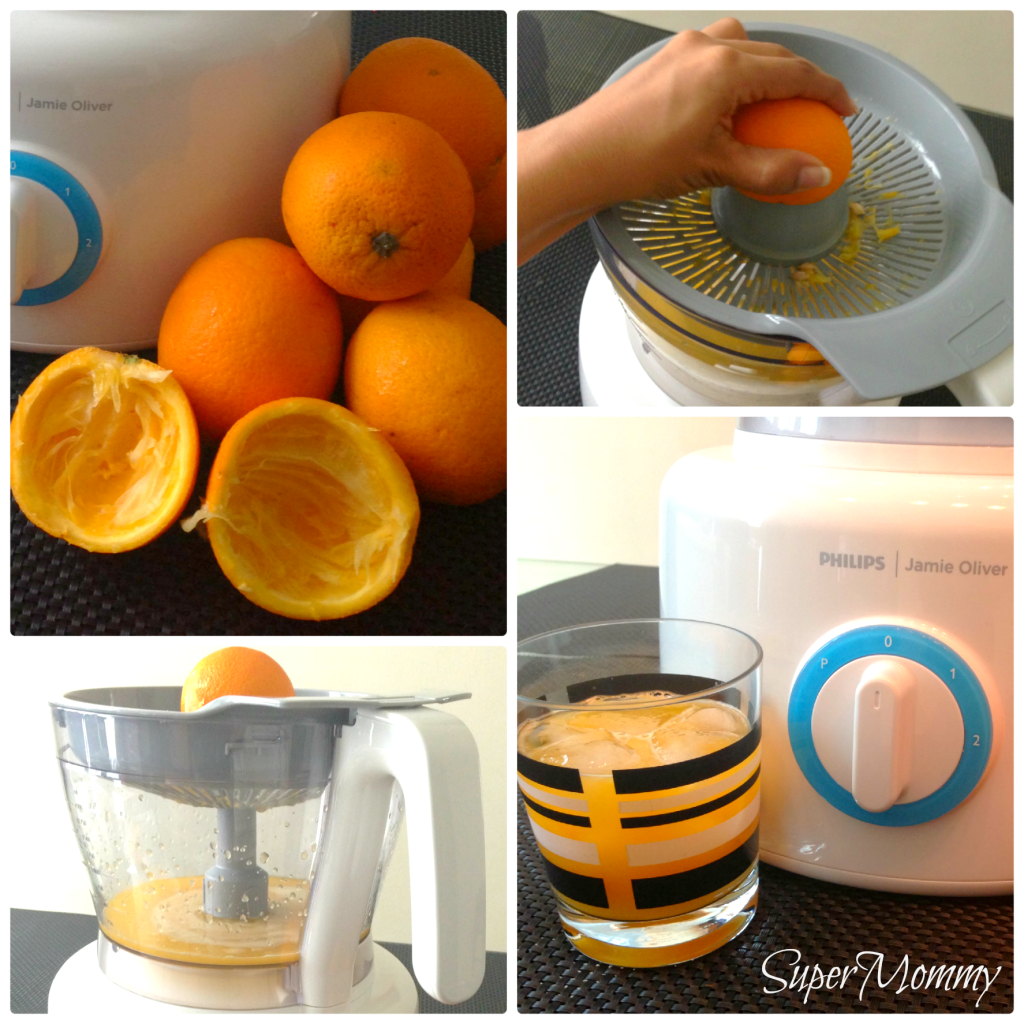 Chicken Burritos are really easy to make, but the fresh ingredients take a long time to prepare. Using the JO Food Processor making these burritos was super easy. First using the stainless steel “chopping knife” tool I chopped up spinach, onions and garlic. We always use a ton of garlic, onions and spinach every day in our house, so when I chopped up the lunch veggies for the burritos, I also made sure to chop enough for dinner as well. I didn’t wash the bowl in the middle of the chopping, since I knew I would be combining the ingredients in my recipe. 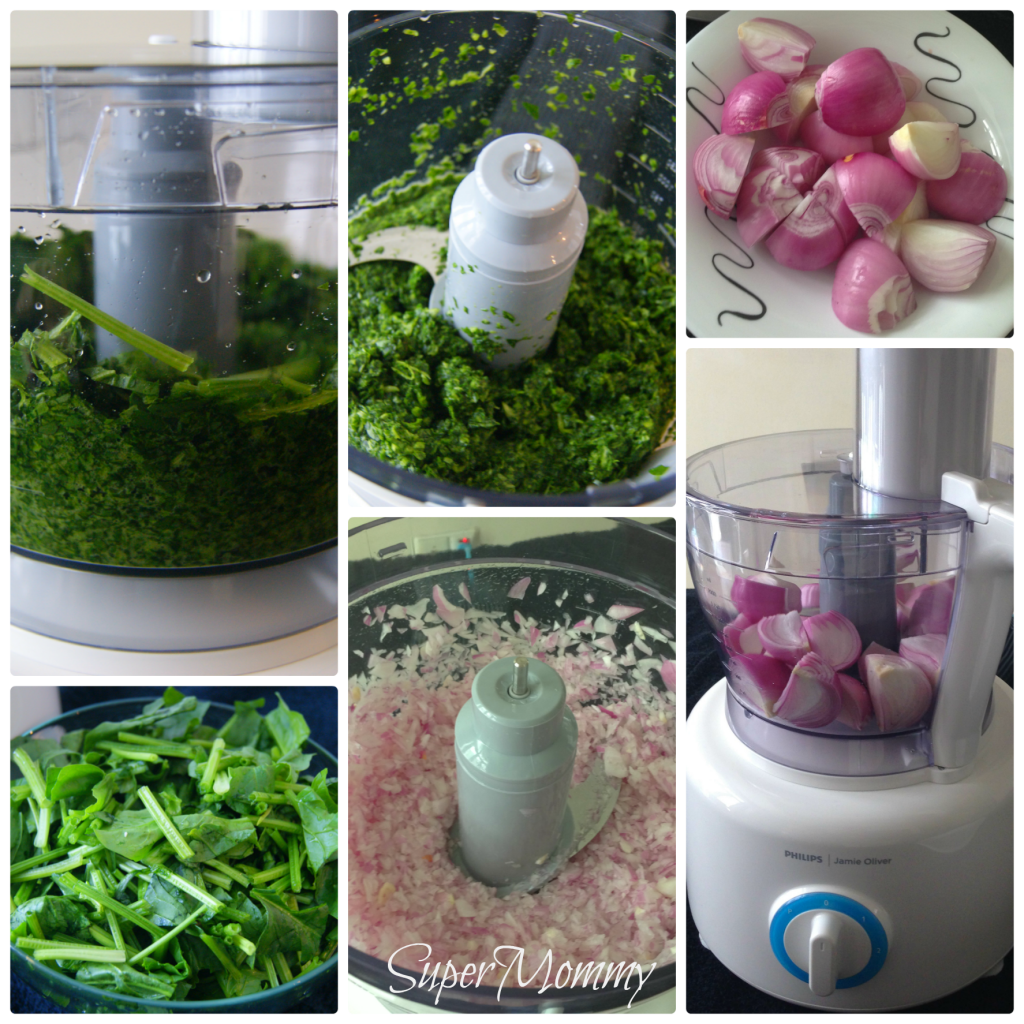 Time Saving Tips: Have a planned menu at the beginning of the week or at least the day. This way you can chop all your vegetables at the same time.

After the chopping of the veggies was done, I used the same “chopping knife” tool to mince six chicken breasts. I wasn’t planning on using all the minced chicken breasts, but I figured I could just mince it all at the same time and freeze what I didn’t use. After washing the chicken I literally just threw all six breasts into the machine (no pre-cutting) and turned the machine on and let the 1000 watt motor do the rest. Viola, fresh minced chicken breasts. Note: I was actually very impressed at how fast and efficient the food processor was with the mincing. Honestly speaking I was in awe that the machine was able to handle the breasts without any pre-cutting on my part. 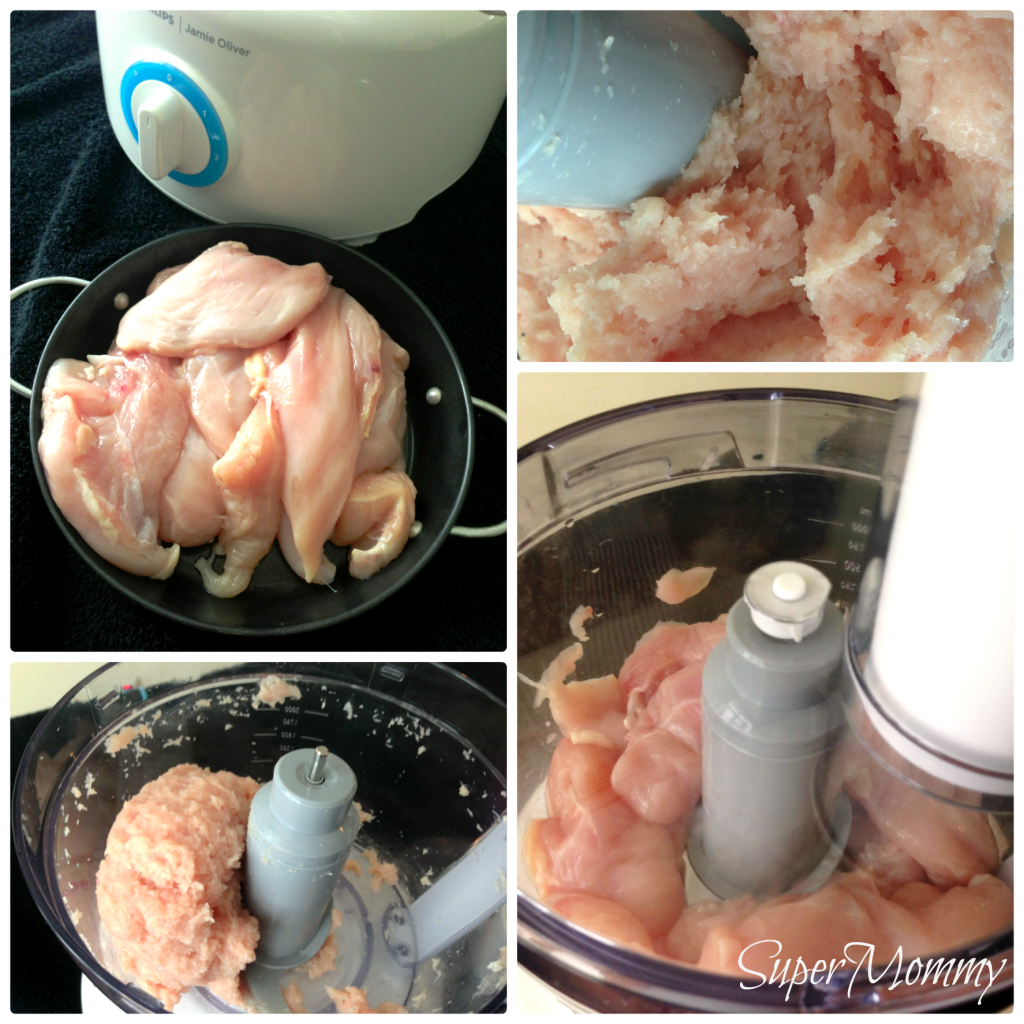 Healthy Tip: Instead of buying minced chicken parts from the store, try mincing fresh chicken breasts. Chicken breasts are a lean white meat and much healthier. 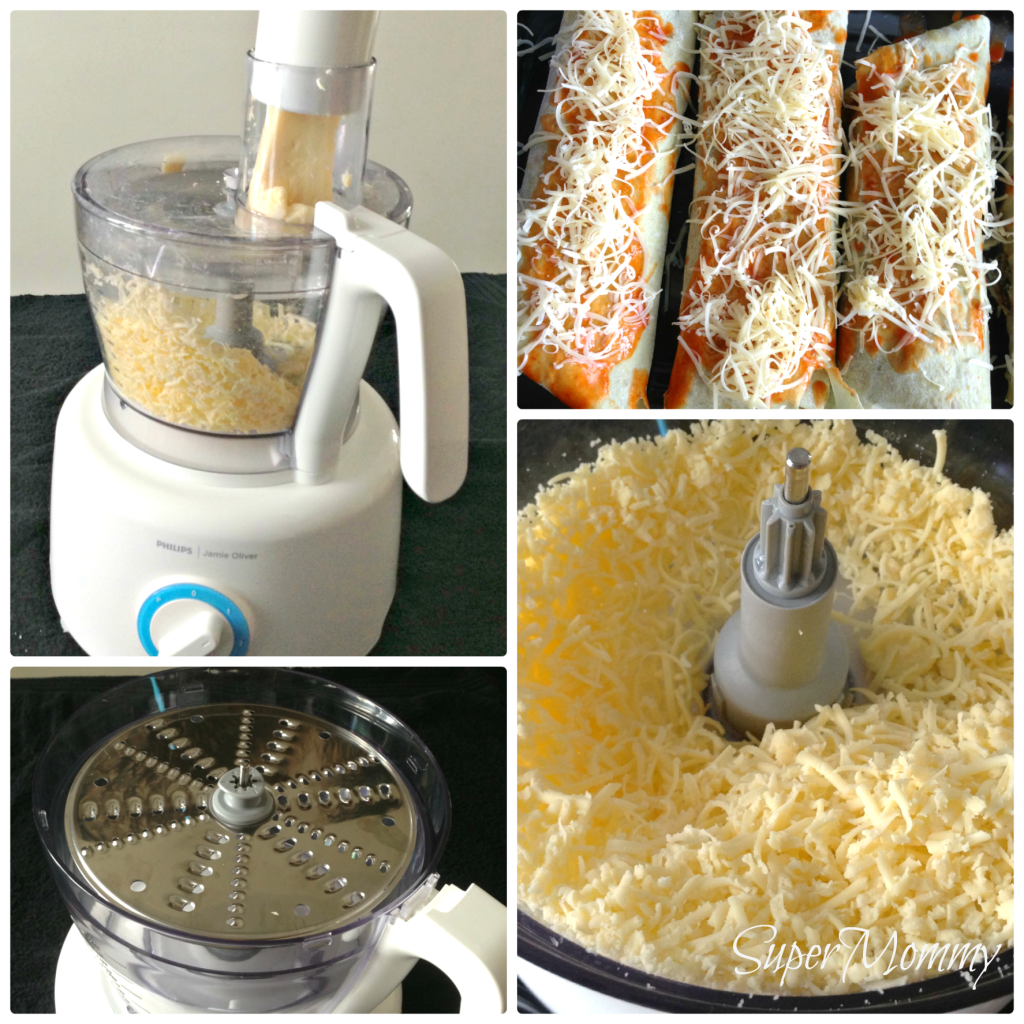 At snack time I decided to whip up some fresh Mediterranean style hummous served with crudités.  I combined all the ingredients for the hummous in the food processor bowl and used the stainless steel “chopping knife” feature. Since the bowl is so big, 3.5 liters, it was easy to make a large amount of hummous and get the correct consistency. 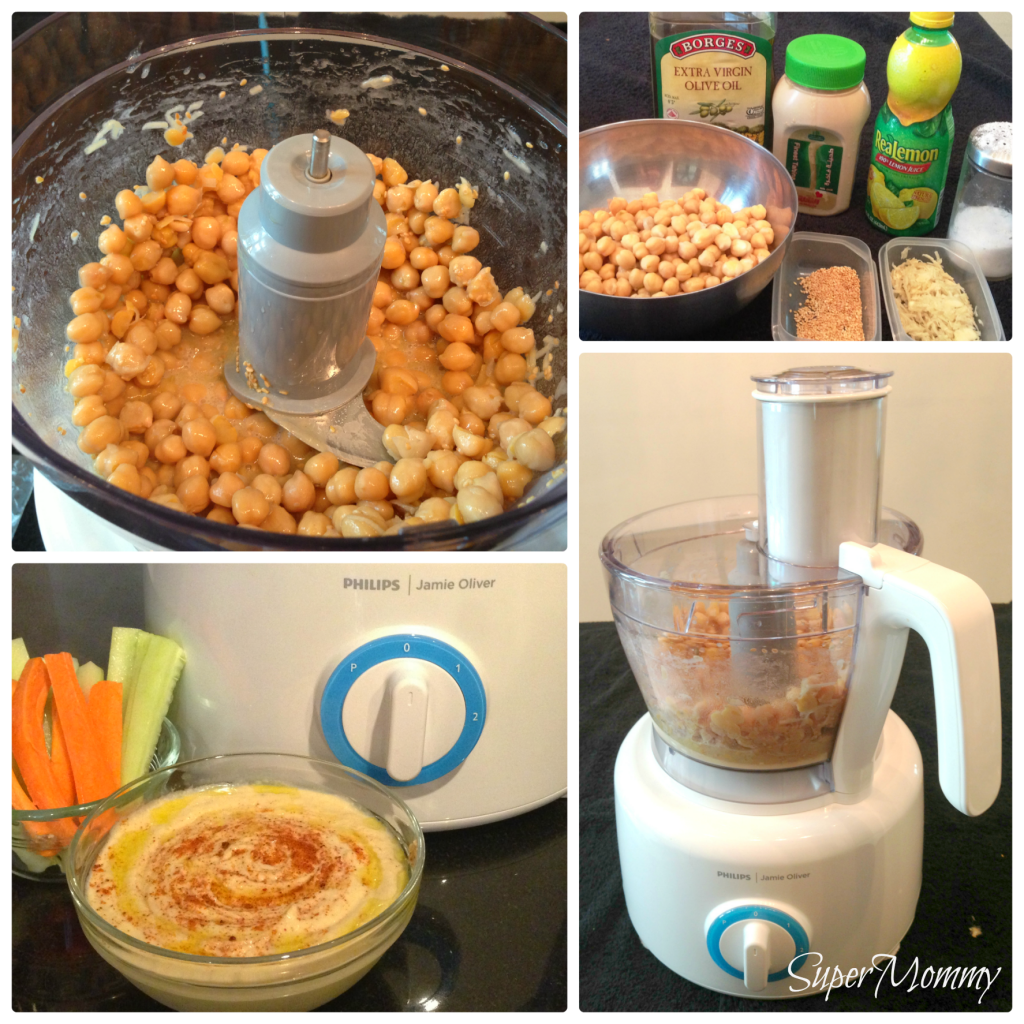 Being in the cooking mood, I also decided to make some sweet potato chips for the kids to munch on. Using the adjustable “slicing disc” I sliced the sweet potato into very thin slices. Then I tossed it with a little bit of olive oil and sea-salt and popped it in the oven. 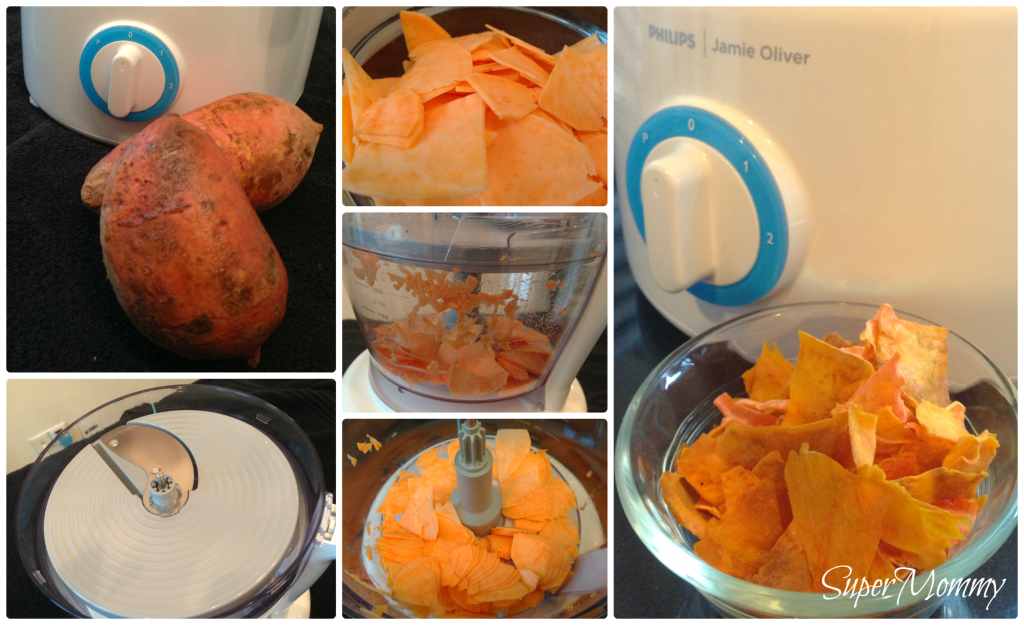 Super Cooking Tip: The thinner the chips, the crisper they will get. Although you can hand-cut the chips, it is very difficult to get it thinly sliced without a slicing disc.

Since I already had already pre-chopped the veggies in the JO food processor at lunch time, cooking dinner was really simple. The only real prep work was for the chappatis. We eat a lot of Indian food in our house and I personally prefer to eat chappatis (Indian whole-wheat flat bread) instead of rice. I decided to use the “kneeding tool” on the JO food processor to kneed the dough (“atta”). Once I took it out of the machine I only had to kneed it once or twice for the exact consistency and then I was ready to make the chappatis. 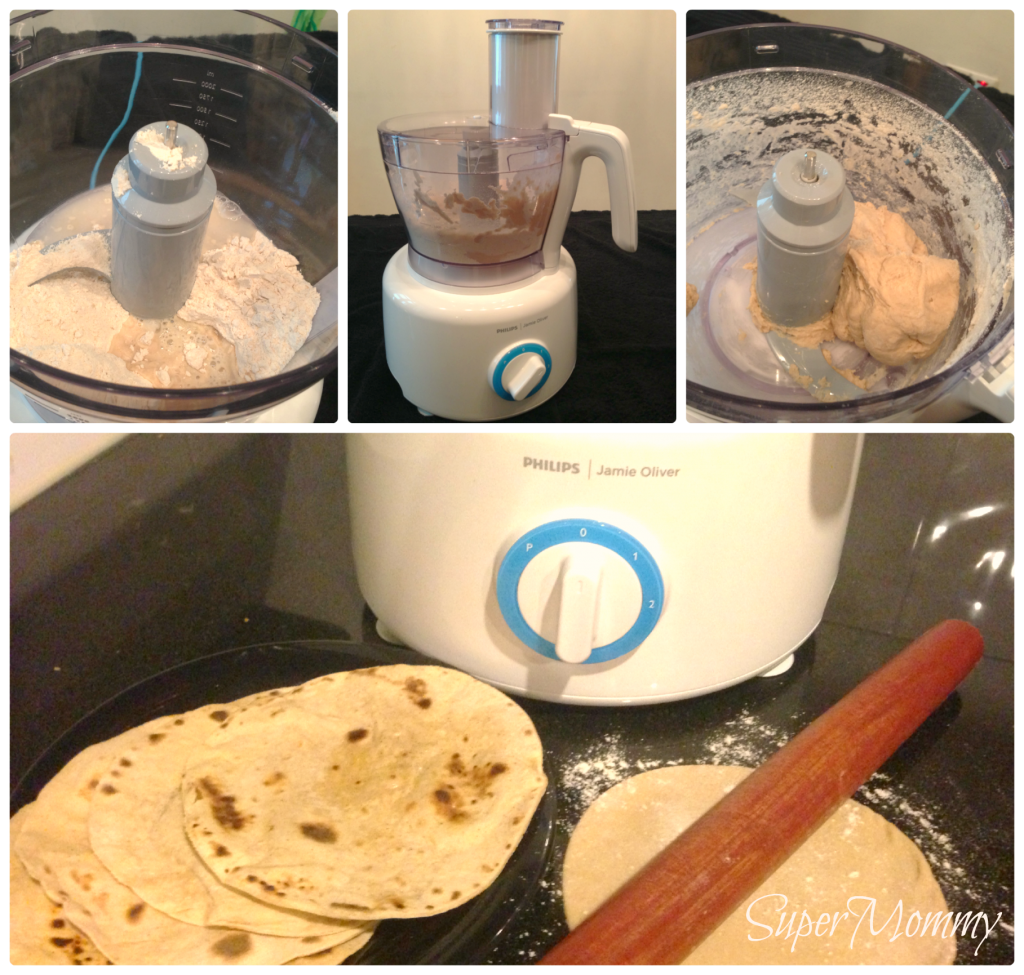 My kids, especially the little guy, loves popsicles. He has never had any “real” popsicles only the special ones that I make at home. Today for dessert, using the “serrated knife” attachment I decided to whip-up a special treat. First I tossed in a block of frozen blueberries, a handful of frozen raspberries, one cube of frozen applesauce and one cube of frozen pear sauce, straight from the freezer into the bowl. Then I let the machine do the rest. The machine was firmly planted with its non-slip, suction feet, otherwise I am sure it would have gone flying across the table. After about 30 seconds, the fruit was all chopped up into tiny little pieces. Then I added four spoons of Greek style yogurt and turned on the machine once again. Within seconds it was done. I was actually surprised at how good it looked and tasted. 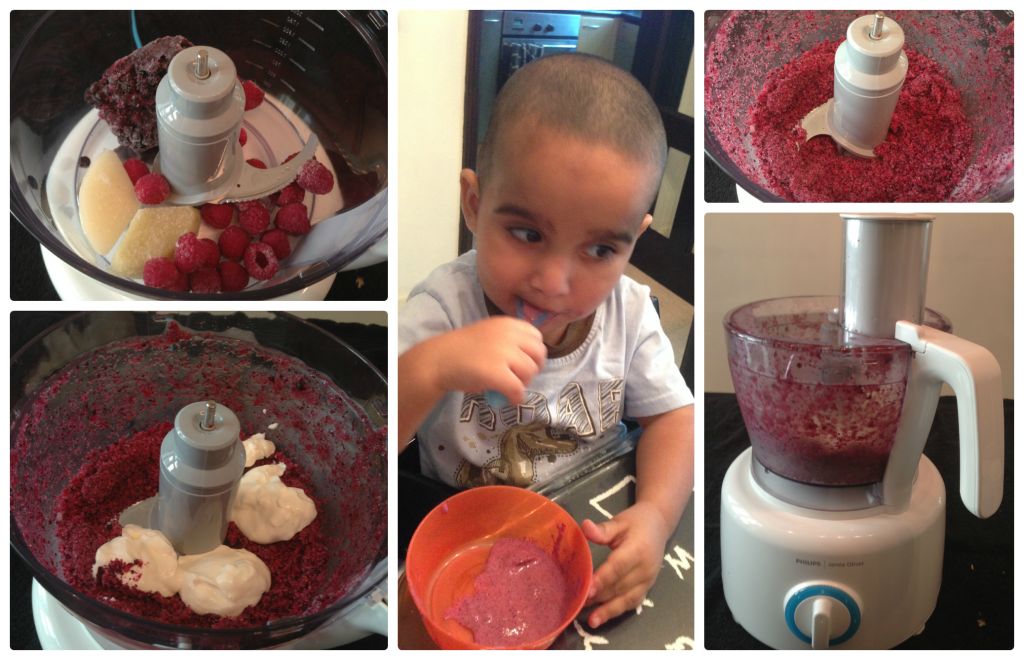 And that concludes my fun day in the kitchen! Even though it seemed like I spent all day in the kitchen, in reality cooking was really quick and easy with my JO Food Processor. Even if you are too busy to prepare gourmet meals every day during the week (which most of us usually are), plan one afternoon as a “cooking day”. On your cooking day marinate and make some items to freeze. Also, “pre” chop, grate, slice, mince as many things as you can. This way when you are in a rush to get food on the table all your prep work is already done.

Until next time – happy cooking and happy eating. xoxo 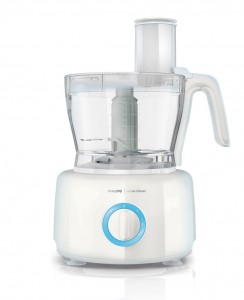 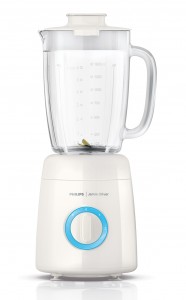 This product was received at no charge to review. No compensation was paid for this post. All opinions and comments are 100% my own.