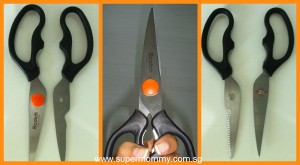 As moms, most of us spend many hours in the kitchen planning and preparing nutritious meals for our families.  Since, my kitchen scissors are one of the tools I use most frequently use while cooking, I happily agreed to review 3M’s new Scotch Kitchen Scissors and see if it stands up to the “Super Mommy” test.

The main things a Super Mommy should look for when buying kitchen scissors are (1) Ease of Use/Design (2) Cleanliness, and of course, (3) Affordability. 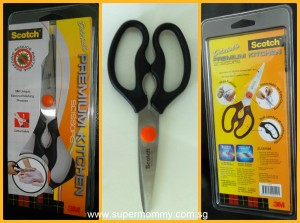 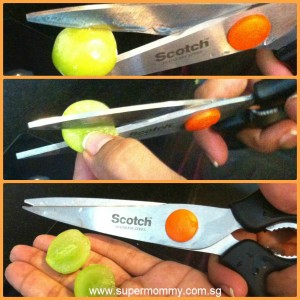 What about the design?

I really liked its’ symmetrical shape and egronomical design. The handle was very soft and had large holes for my fingers to fit through.  It also has a bonus feature – the handles also allow you to open bottles!  Additionally, unlike the generic stainless steel kitchen scissors the Scotch Kitchen Scissors’ are treated using a unique electro-polishing process for superior smoothness and to help stop the growth of bacteria.

Was it easy to clean?
Yes!  One of my biggest concerns while cooking is the possible bacteria such as e-coli and salmonella that are lurking in my kitchen.  The detachable blades of the Scotch scissors made it super easy to clean and dry (which is really important for longer-lasting hygiene and durability of the scissors). 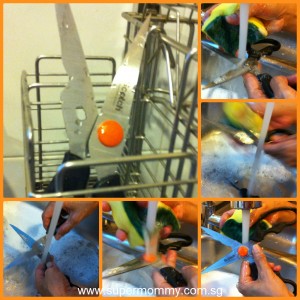 How much does it cost?
The best part is that the scissors are really affordable!  The Scotch Kitchen Scissors come in two types – detachable (S$19.90) and non-detachable (S$15.90).  They can easily be purchased at all leading hypermarkets, supermrkets, D.I.Y. stores and major bookstores. 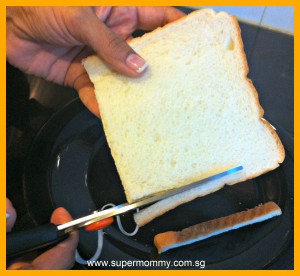 With its technical features and easy handiness, the Scotch Kitchen Scissors by 3M are a definite must-have kitchen tool for Super Mommies.

Stand to WIN your own pair of
Scotch Premium Kitchen Scissors!!

Send your Answer and the following information to
officebiz@mmm.com
by 27 Aug 2012:

Note: The contest is open to Singapore Citizens & PR’s over age 18.