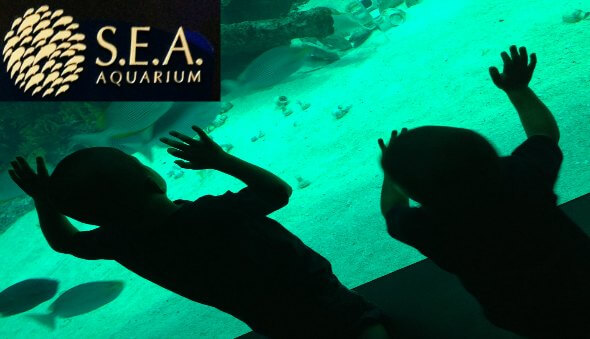 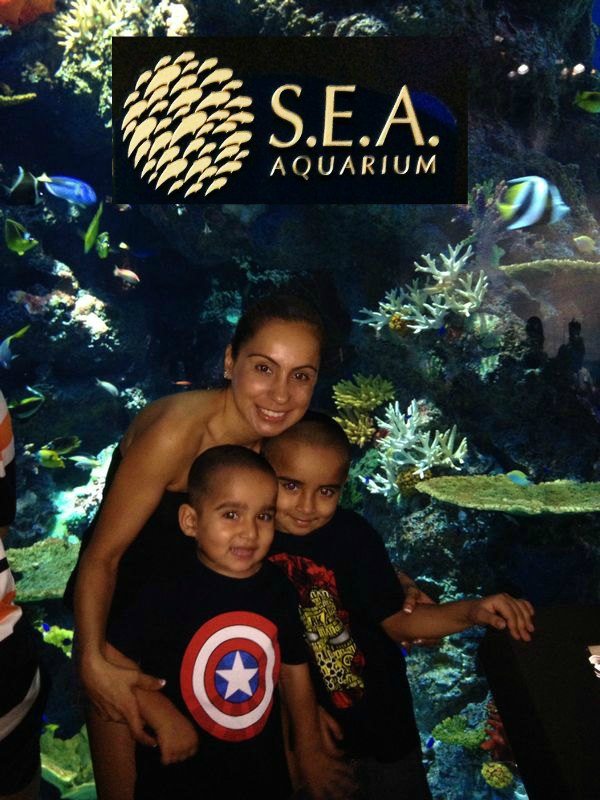 Over the recent winter school holidays we finally got the chance to check out the S.E.A. Aquarium at Resorts World in Sentosa (Singapore).

According to the Guinness Book of World Records, the S.E.A. Aquarium is the largest aquarium in the world. There are more than 100,000 marine animals from over 800 species habitats, including a variety of fish, sharks, eels, sea jellies, star fish, groupers, manta rays and many more.

In order to get to the Aquarium, you first enter through the “Maritime Experiential Museum”, which covers the history of sea exploration and trade in Asia.  We breezed through the museum as the kids were eager to see the “fish and sharks”. We did the boys did pause for a few minutes to see the life-sized replica of Admiral Zheng He’s Treasure – in case you are wondering the ship is huge and very realistic. 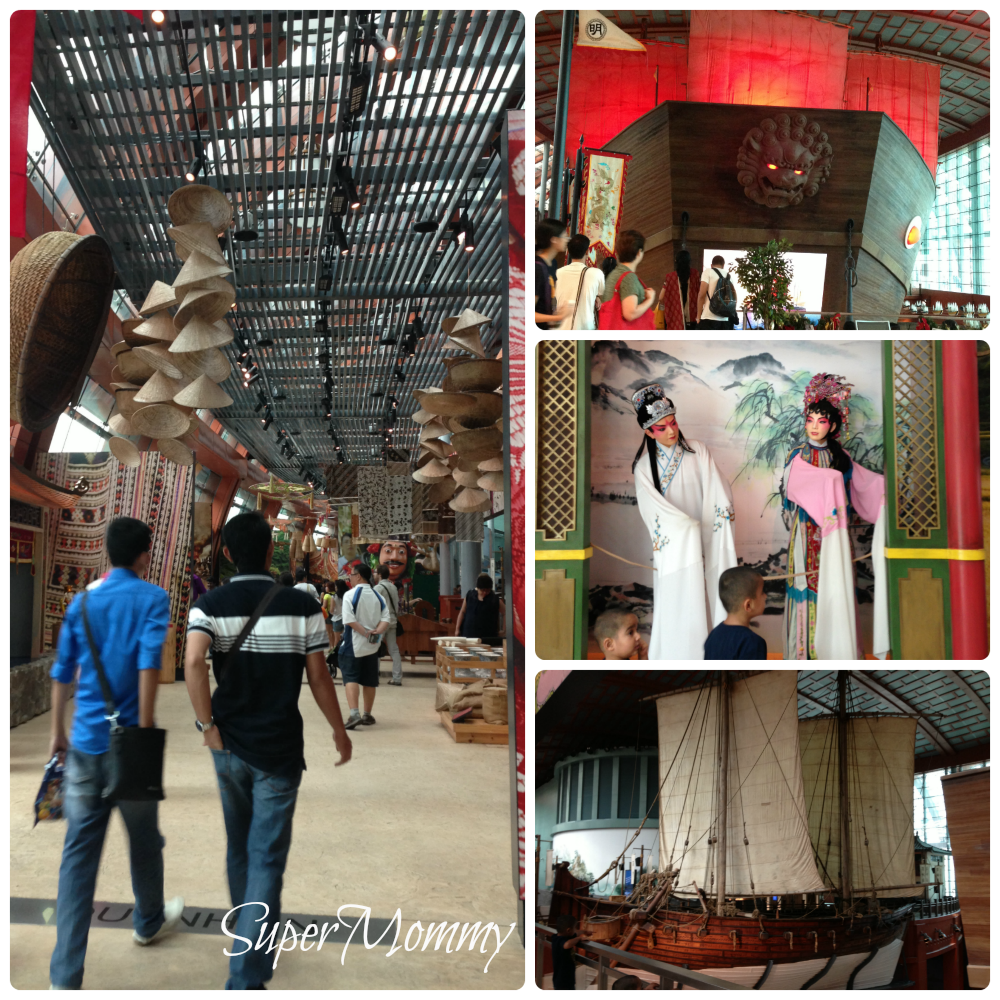 Once we got to the entrance of the aquarium, we waited in a short line for approximately 5 minutes before entering. We had already shown our tickets to get into the museum – this line was so that it didn’t get too crowded at the front tanks.

The Aquarium is designed in a rectangular shape. The entrance and the exit are right next to each other The Aquarium is broken up into 7 main features:

The first tank that you see when you enter, houses a life-sized underwater shipwreck and a variety of fish and other sea creatures swimming around. You also walk through a glass tunnel to get the the aquarium. 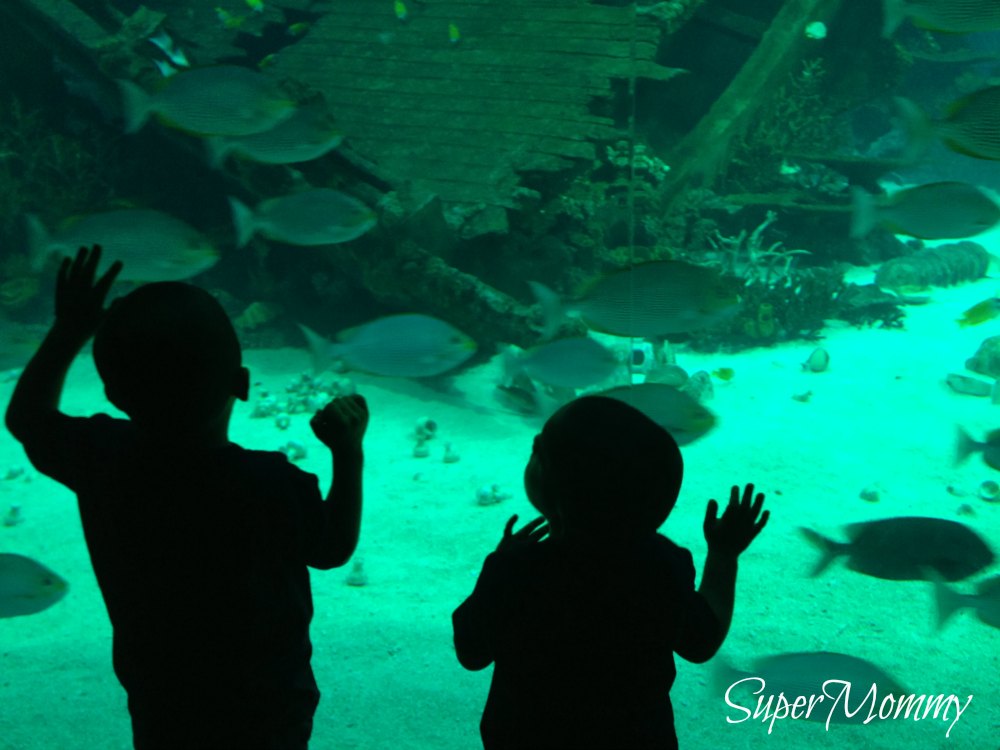 The discover touch pool area allows you to actually touch the sea stars and sea urchins. We however did not get to do so. Since this was one of the first things after the entrance, it was really, really crowded. We did not even get close enough to the tank (lots of tourists pushing to get to the front). We did explore a bit and look at the variety of sea creatures through the glass. 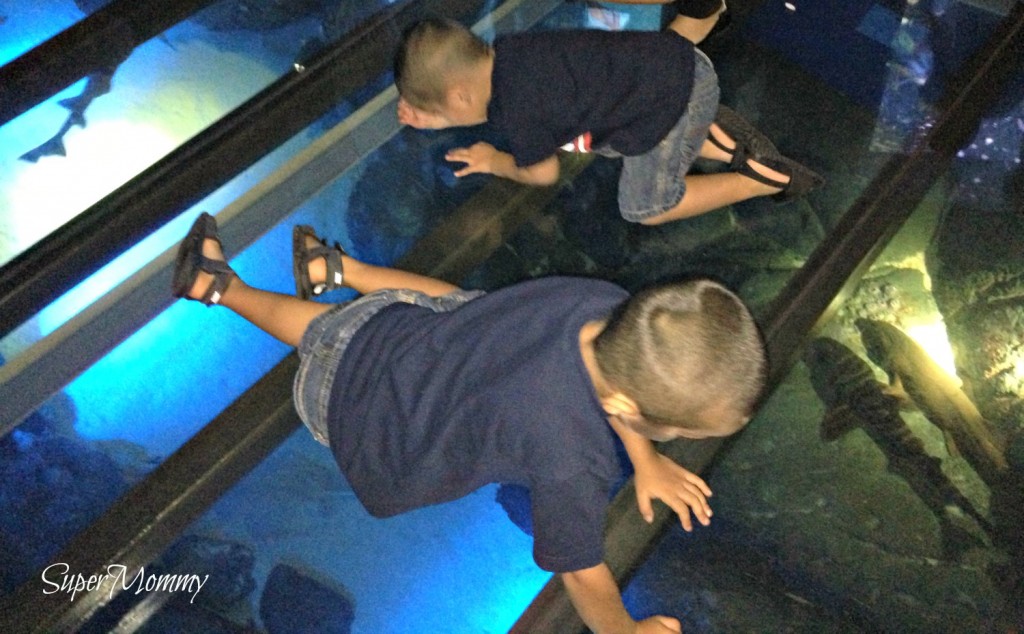 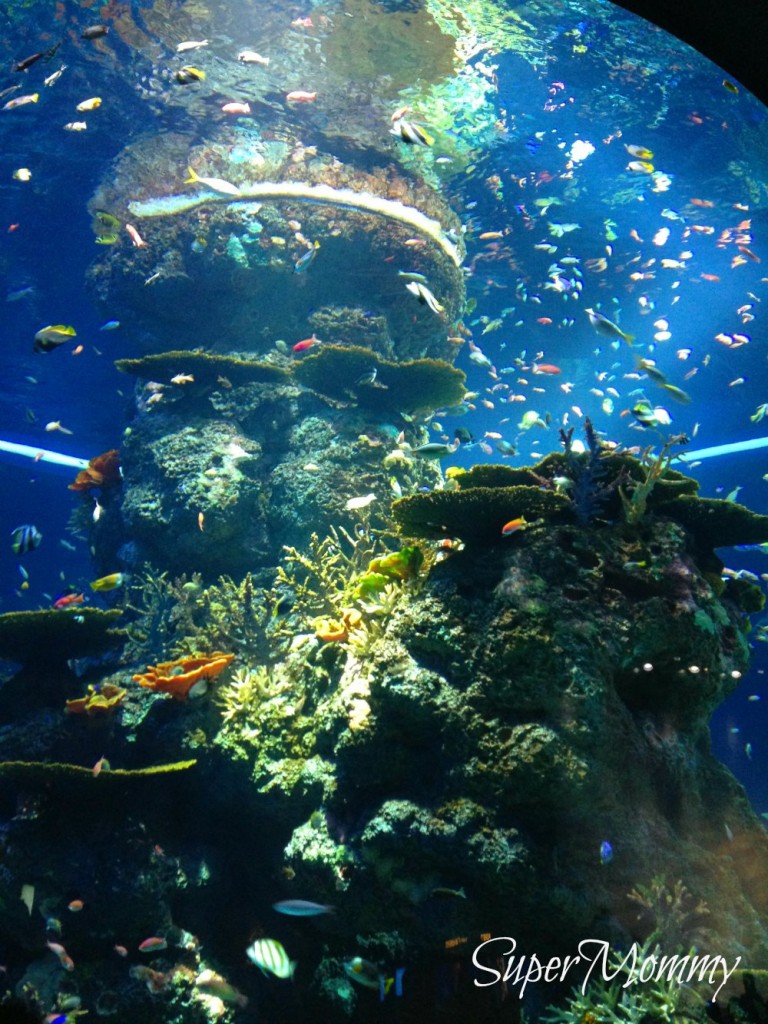 The Ocean Journey area houses the bottlenose dolpines, a variety of fish and sea jellies. There were many tanks of sea jellies in this area. A few of the tanks were lit in different colors to give a glowing effect. The kids really liked the sea jellies – probably because they looked and moved so differently than the other sea animals. 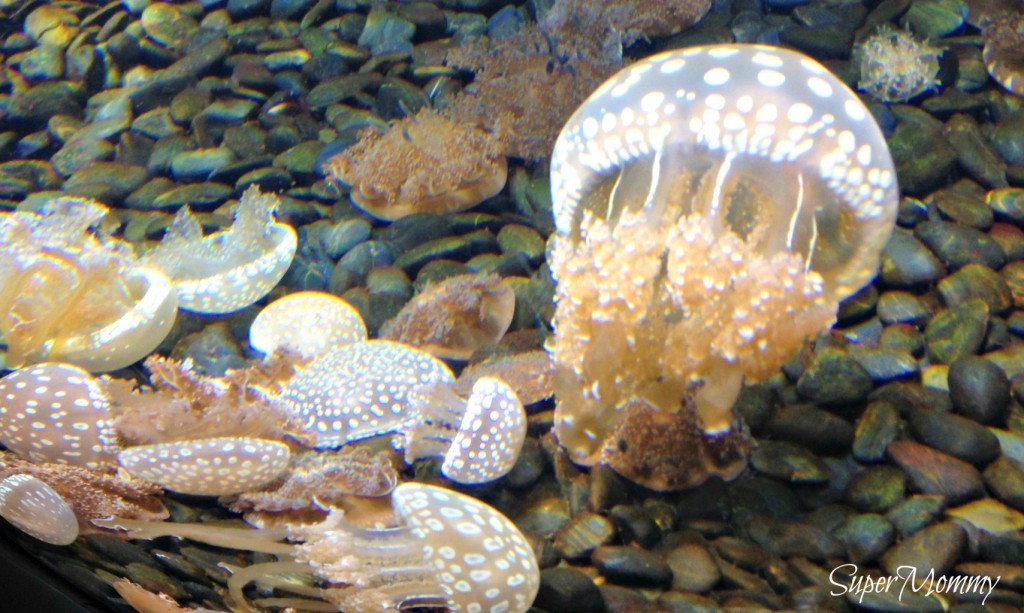 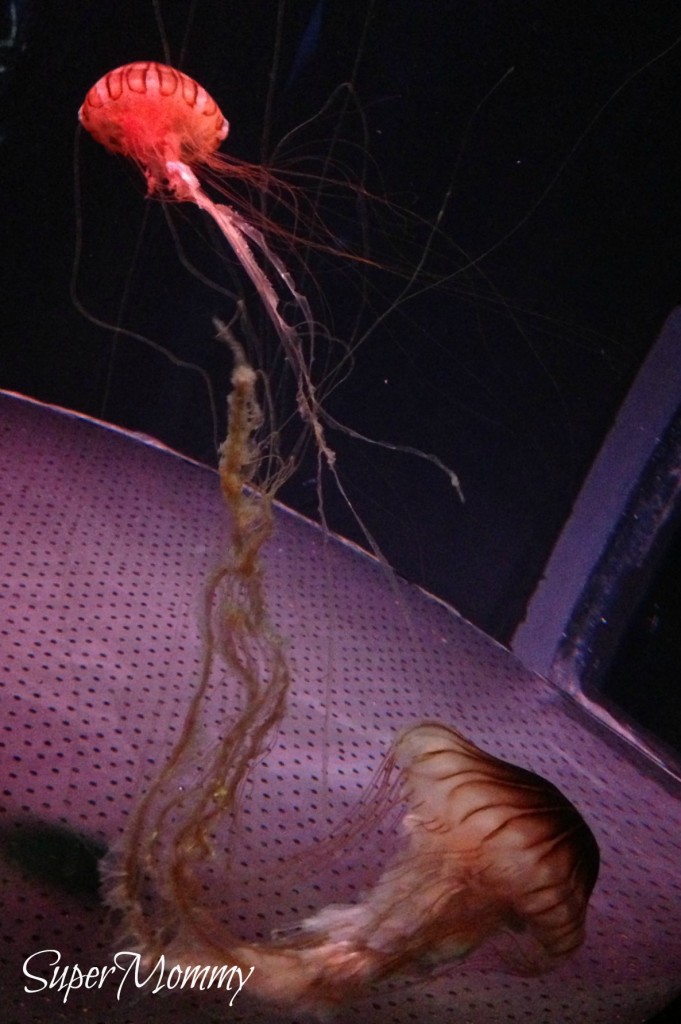 The Open Ocean is the main attraction of the Aquarium. It is the “planet’s largest window to the ocean”. The boys enjoyed sitting by the window and watching all the marine life swim by. The blue light from the tank has a very relaxing feeling. Lot’s of people were sitting in this area and eating snacks and just staring at the glass. Although the Aquarium was really crowded the day we went, the Open Ocean viewing area is massive. It is stadium style, with three sections of viewing rows.  It wasn’t too hard for us to find an open section right in the front to hang out. 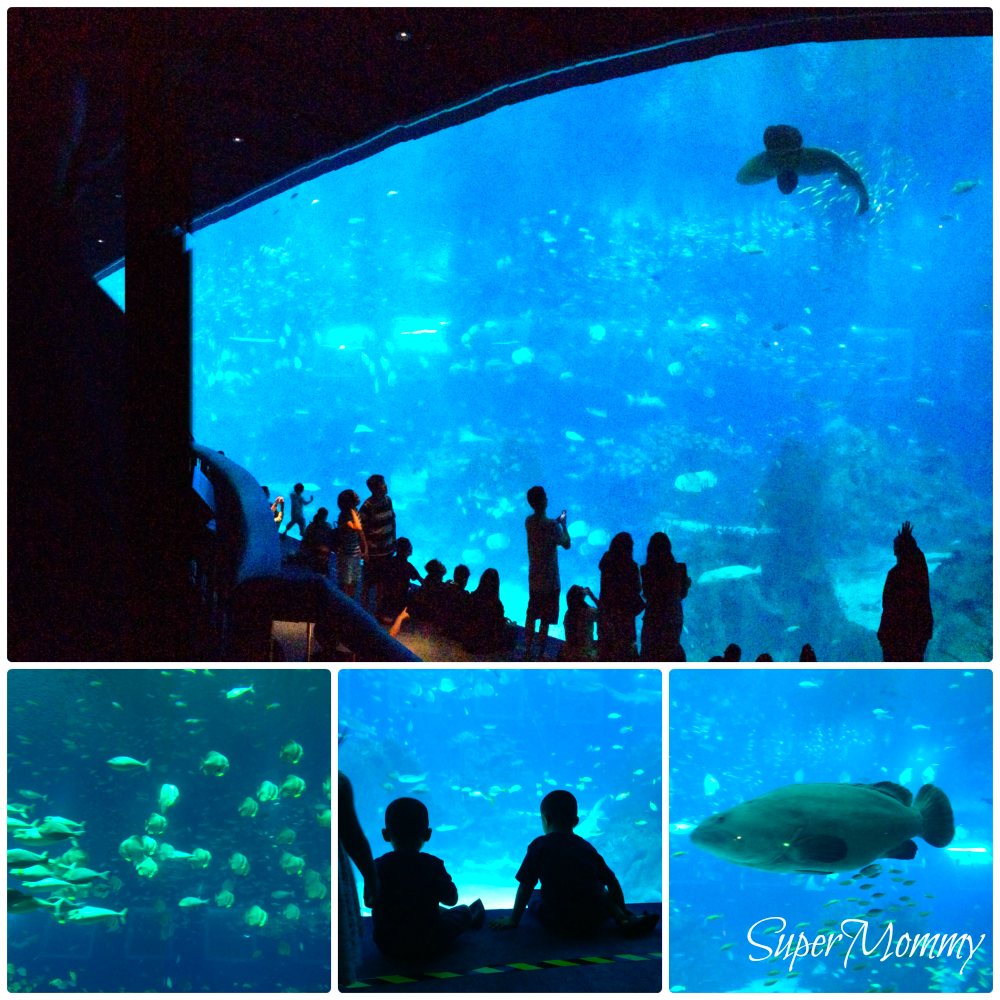 The Ocean Dome is directly connect to the main acrylic panel from the Open Ocean area. The main feature of the Ocean Dome is the “world’s largest underwater acrylic dome at 9m in diameter”. We really did not get to experience standing under the actual dome because there was a capella group singing songs for the holidays standing right under the dome (hence the lack of a good picture).  But I can’t complain because the boys were entertained by the music and I had to literally drag them away after 10 minutes of sitting there.

The Moray Eel section, basically houses the Moray Eels. I personally thought the eels were really interesting. I have seen my fair share of fish and sharks in my life, but the eels were just so cool, yet creapy to watch. There are so many of them crawling in and out of the rocks and other objects in the tank. There is also a built in clear dome that you need to crawl into to get and up close look at the eels. 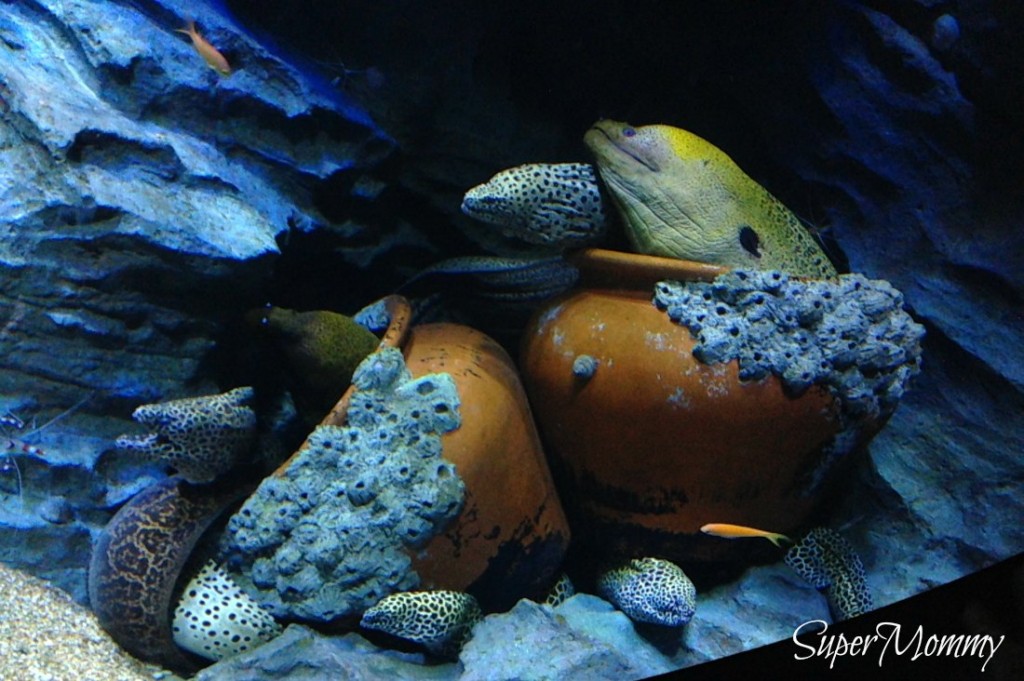 The Shark Seas is the last main attraction of the Aquarium. The located in the tunnel that you exit through and right out side the exit. Although the sharks could considering one of the most fascinating creatures, especially for little boys – my kid’s showed no interest in looking at the sharks. I think they had enough by the time we reached the end and were more interested in fighting over the make your own souvenir machine. 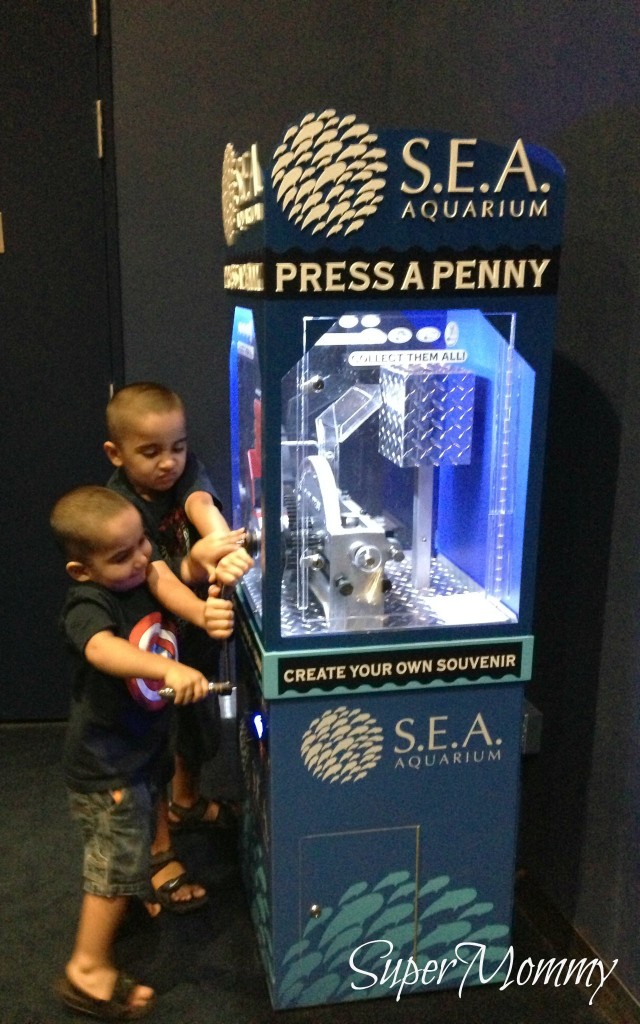 Dining Options: The dining options are very limited inside the Aquarium. I saw one kiosk inside at the Open Ocean area which sold drinks and snacks. There is also a restaurant in the Open Ocean area that allows you view the marine life as you dine. I would recommend bringing in some of your own food to snack on and then eating a nice meal at one of the RWS restaurants outside the Aquarium.   Note: The Aquarium does allow you re-entry, so you can come and go as you please.

Planning Your Time: We went on Sunday, 29 December around 3:45pm.  As you can imagine it was CRAZY packed with people.  Some of the attractions were too crowded to get a good view. My husband and I had to each take hold of one child to make sure that they didn’t get lost.  My kids are only 2 and 4 and didn’t really want to stop and read the boards with all the information. The whole Aquarium took us about 1 hour 30 minutes to go through. I think on average 2 to 3 hours maximum will be enough. The place is not that big – it really depends on how much time you want to spend standing in front of each tank.  Although we still had a fun time, if possible, avoid going on a weekend – you will probably have a much nicer experience.

SuperMommy’s Opinion: The S.E.A. Aquarium is was definitely a fun place to visit. The whole family had a great time. We are RSW members and got free tickets when we signed up for our membership, otherwise the tickets would have cost us about $100 (with the 2 year old entering free). I’m not sure if it would have been worth it for such a short outing (tickets to the Aquarium + the high parking rates).  We probably will visit the Aquarium again, but it will not be a regular monthly outing like the Zoo. I would recommend checking it out at least one time – it is quite an experience.

Location: The S.E.A. Aquarium is located at Resorts World in Sentosa (Singapore).

Parking: You can park in the B1 parking lot (the same parking lot and escalator as Universal Studios).

Tickets:  Adults: SG$38  Kids: SG$28 Seniors: SG$28  Note: Make sure you look for promotions. During the school holidays Singapore Resident’s received 20% off ticket prices.  Also, they sometimes have package deals with the other RWS attractions. 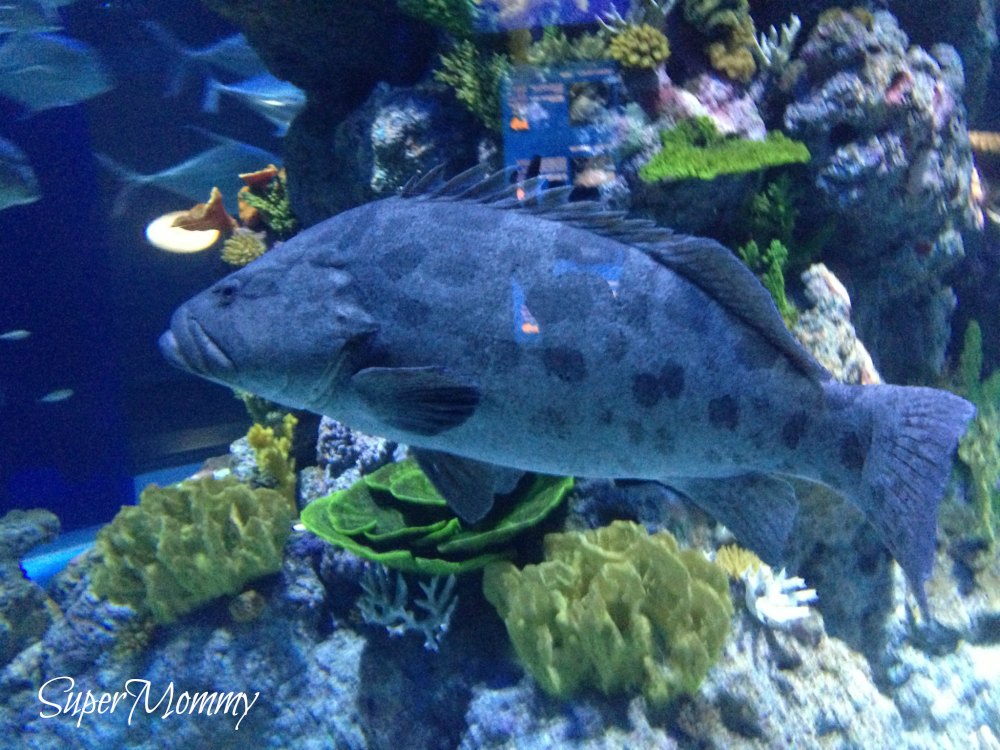 Hope you have a fun day at the Aquarium!